“The more you believe, the less you understand…” 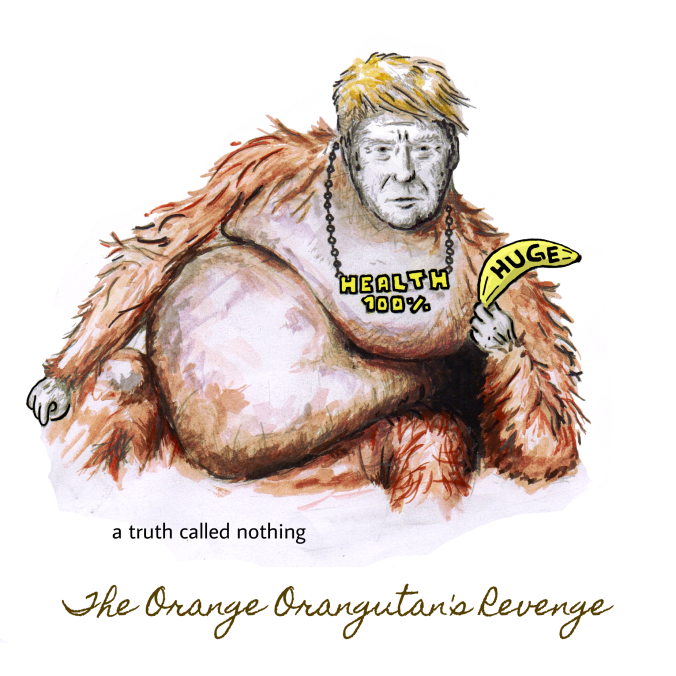 DJ Bo Blaze: Listen closely to the guitar solo, and you can hear the memories of sunny days through the mind of someone trapped in the darkness of winter. When composing this solo I let my feelings at the time flow freely through my fingers.
Like any great piece of art, it can apply to many different situations, and I think it fits well in the context of this track.

Adam Sobranie: The Matryoshka candidate. There’s much to complain about. Not least for someone fond of the ”truth.” I believe in life, love and jolly good times; and I believe these are best pursued through the understanding of nature and the universe. As such, I like political discourse to be based on facts. Even though mine and my procedure’s truth is nothing. No religion, no party, no anything. And here we have one party, the American Republican Party, who conjure >97% of ”pants-on-fire” in this presidential campaign – that is the equivalent of statements so bizarre if Goebbels heard them straight from Hitler’s mouth he would not believe he said it. I would like to believe there’s balance. It is nice to want to believe there’s balance. But there’s no balance. Progress is not sustained by making shit up. The universe – as we understand it – is not built on the same principles as Facebook: the see what you [like] principle. In addition, 60% of what the nominee of this party says is rated ”false” or ”pants-on-fire.” FACTS are ESSENTIAL for the PROGRESS of society and human life, and this is just embarrassing for anyone involved or supporting it. Besides it’s disgusting. He’s the Matryoshka candidate of lies, falsehoods and simplifications where you peel off one disgusting layer; find another ever worse. It’s a con-man with internet trolls as the primary news source, who really lives in a non-existent reality, producing “solutions” no serious human being ever believes is possible to actually implement; everything delivered for people who seemingly have no interest in reality. I heard Virtual Reality is around the bend and I think that’s the obvious business area for the Drumpf Distressed Debt Fund (ie, his company) – Trump Virtual Reality. The content is already here.

Samuel Lundgren: And so, with apologies to a proud and ancient race of people (the orangutans),  we begin our EP project – to release a series of 5-song EPs of varying styles semi-regurlarly – with a radio-friendly political song. Bo and I wrote the basic song, and Adam added ideas and words. It is certainly an odd duck for us, but we sort of plant ourselves firmly in the present with this one. From this stance we will fan out in a variety of directions, but right now we look at the long-awaited revenge of the overprivileged; the everyman perspective from way the fuck above.

DJ Bo Blaze: Mankind’s constant struggle to turn chaos into order served as the backdrop for this remix. In many ways a dark piece, there is always a glimmer of hope present throughout the composition, representing the idea that there is good in everyone and everything. We can all become someone better.

Adam Sobranie: In a different time and a different place, life was simple and complicated. Beautiful and ugly. This is a song from those times.

Samuel Lundgren: This is one of those remixes that just fixate on a single phrase, kind of a musical obsessive compulsive disorder, and transport you somwhere else by switching out the backdrop, as it were, surronding that phrase. This subtle song might just be my favorite on this collection, overall.

DJ Bo Blaze: Rock, what is it? That is a question that I often ask myself. With this remix I set out to find the definite answer to that question.

Adam Sobranie:  This is the world’s best prog-pop-song. Post-modern indie-stadium-rock. This genre is terribly underfunded and I’m glad, proud and enthusiastic to present it to the world!

Samuel Lundgren: I think most that needs to be said about this song was already said in the second entry about Sluggerhand, so I’ll leave you with that.

DJ Bo Blaze: This remix was inspired by something that I once witnessed on a beach in the south of France. I was booked to DJ at a club that evening, and had some time to kill before it was time to sound check (I take my sound very seriously, and it’s written into my contract that the venue must allow me to sound check properly, or I simply won’t perform that evening). Anyway, I wanted to check out the beach, so that’s where I went. Once I got there the first thing I saw were two men tangled up in a fist fight. They were screaming obscenities at each other and one of them, a short hairy guy with a beer gut, was bleeding from his nose. All of a sudden he landed an uppercut that knocked the other guy, a lanky blonde guy, out cold.
You’re probably thinking that he must have been happy that he won the fight, and so did I. But no. You could see the tears in his eyes as he quickly sat down next to the guy he had just knocked out, trying to shake some life back into him. Through the sobbing I could hear him say “my old friend, what have I done”.
When the opportunity presented itself to remix My Old Friend, this was the first thing that came to mind. With this remix I wanted to show how friendship can go from something beautiful to something chaotic and very dark.
I often wonder what happened to those two guys, as I had to leave right then not to miss my sound check.

Adam Sobranie: You never saw the streets unless you’ve chased the dreamers through the moonlight and fought the trash under the street lights. You’ve never seen daylight until you spent every night awake just to see it. And you’ve never known love if you haven’t desperately hated it. Someone loved once, and someone might still? Does it matter? Probably not. Possibly it means everything. Perhaps it hurts not to know, probably it hurts more to know. A strange saga from a strange city.

Samuel Lundgren: This is one of my favorite songs on Sluggerhand, and I was quite pleased to see Bo dismantle it rather than interpret it. A musical plot twist, turning the ideas on their head. Calmness and intensity, co-existing side-by-side in harmonious bliss, divided by the unmistakable sounds of electric or perhaps philosophical malfunction. What better sound to represent the current climate? I don’t know.

DJ Bo Blaze: Like a good wine, songs sometimes need a bit of time to reach their full potential. Hidden away in the vaults for over a decade, this track now makes its debut. Listen closesly to the chord at the end of the chorus, and how it sounds like it doesn’t fit the scale, yet the song keeps on going like nothing happened. In life we sometimes do things that hurt those that we care about, we step out of the scale so to speak. Most of us will realize this, apologize and explain why we did what we did. But some people won’t. If you’re one of those people, then perhaps you won’t hear how that chord is out of place.
At the end of the day you must go with what you think is right, but keep in mind that it might not be right for those around you.

Adam Sobranie: By the old lake in the old city. Yours truly and the spectral Bo Blaze sat down in the No Mercy studios. Inspired by Claude Francois, Princess Diana and Airwolf we created this song for your listening pleasure. It was a great experience. Bo Blaze is an artist and genius, and he is my friend. It’s also an awesome song and one of my all-time favorites.

Samuel Lundgren: My abiding impression of working on this song is the sheer amount of time it was in progress. Adam and Bo wrote the basic song ten years ago back in the old city, and I added the middle section a while later. Then the song languished for years, until we picked it up and added to it this spring. We excavated a new intro from some discarded parts, I rewrote my middle section completely several times before ending on a kind of pastische of Scary Monsters, and now it finally sees the light of day. To end the first chapter of our new EP project, it seems fitting with this futuristic memento of an earlier time.

One thought on “The Orange Orangutan’s Revenge (2016)”