One of the major slogans from the atheist rock opera EP, Science – Like Religion But Real. Religious adherents think they have it hard, especially in substandard countries like the USA, but understand that we atheists usually can’t even express our tenets (well, the singular tenet, really) without much of society deeming us rude. We always have to add that caveat, “but I respect your opinion on the risen dead desert guru” and so forth. Even though our worldview is eminently more logical, more confirmable, easier to work into a stable society. Well, no more. We’re not on the fence anymore. 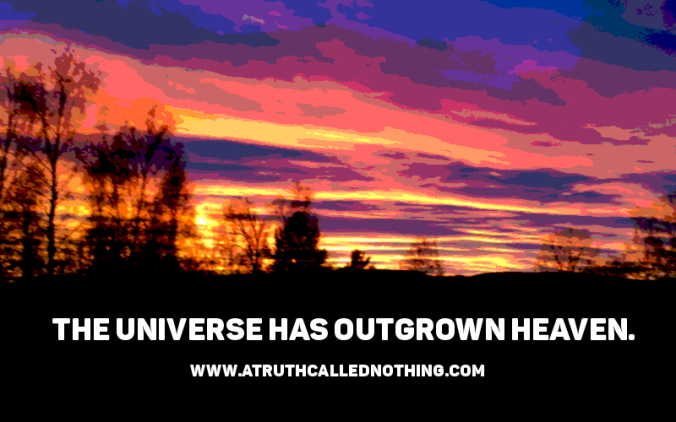 A line from the second song, originally from a song we discarded. We had to change the ending of the record in a hurry when the philosophical marketplace on our planet started to quickly worsen. That’s atheists for you: when things change, we reevaluate, recontextualise, reform. We are free to do this because we are not bound by one single “core” idea that can’t be questioned or disproven. Our universe has long outgrown heaven and you are welcome to join us.

More of a commercial slogan. The point is not that magical thinking is always bad. The point is that you can retain the wonder without gods. I once had a teacher who proclaimed the beauty of the lakes of Scotland as evidence for god. The lakes are transcendentally beautiful, hence god. But even if you accepted this tremendously weak argument, the lakes will be just as beautiful if you get rid of god and learn about the properties of water and light (and so on) that create the beauty. Just an example of our point. You religious folk will just have to take our word for it: beauty, grace and transcendence are not dependent on gods.

The rudeness of people who question the existence of magical overlords and express this through song. There is so much religious music in the world. Try to understand that we have as much of a right to give voice to our beliefs (yes, of course they are beliefs, mr. Gotcha. The difference being that these beliefs are well supported by the evidence. Mr. Gotcha might claim that the religious find their evidence in their holy texts, we atheists find evidence in science, and both systems are closed and separate from the other. Good try, but this is patently untrue. They are descriptions of reality that are either true or false. And only one of them is closed: the only thing you have to do to get science to accept gods is to prove their existence. All the tenets of science are falsifyable and will be replaced when the evidence suggests new theories. But religion will never be falsified from within its own system; the existence of invisible, supernatural beings is taken for granted and can never be questioned).

It’s not about being mean-spirited; we know people cherish their religions. It’s about being realistic regarding what would be the better philosophy to bring the human race forward. There is no philosophical problem you can solve by adding “God” to the equation – it only muddies the waters. There is no moral problem you can solve by the means of religion that you can’t just as easily solve by the means of rational humanism. And especially considering the future which is fast approaching… if we don’t get war, disease and mass death, we will most likely get automatons and AI making large swaths of humanity more and more obsolete. In such a future, we won’t be able to afford hiding out in different tribes and squabble over nonsense. We will soon need to realise that we have to work together. Religion is a worldview that inherently divides humanity into tribes; science is a worldview that inherently forces cooperation. The sell-by date of one of these worldviews is approaching, and anyone looking at it rationally will know which one. All previous religions were believed in as fiercly as the ones we have today, and they all became obsolete. And we have fewer completely new religions arising today (hello Ron), suggesting there probably won’t be many replacements when these last ones finally die. We didn’t have to wait for the sell-by date to pass – we could have applied the qualitative approach and thrown out ideas that have outlived their usefulness before they start to develop mould. But in any case, that is what we now must do to avoid spiritual food poisoning.