”Our inspiration was the dirt, and our limits were paved in insanity”

In the aftermath of the standard BOF-conference and annual dick fest, the meeting notes clearly stated no communication with any potential readers or listeners were to take place about any atcn activities. No golden tombs of internet fame should be erected about the generous and inglorious history of the band. And as such, our feigned heroes went into a fictional hiding with the subsequent result of zero updates here or anywhere else. So, as it is, this spectral organization has been a well-kept secret for many a-years and it is just recently, at a new and much more vigorous BOF-conference (as well as living encyclopaedia of socio-political fetisches) they’ve decided to unwind this complex operation of secrecy and start unraveling the wonders of their produce. 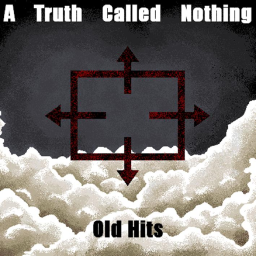 We start this break-out from secrecy with this sweet and simple sample of tunes derived from the hinterland of their career. This sample consists of ten uniquely odd specimens described in embarrassingly high detail below. The album has been recorded over an undisclosed stretch of time in a whole bunch of different locations around our spheric world. In total about a dozen fine gentlemen and ladies have contributed from Dj_Vomit to Bo Blaze or Conrad Haifa and Marty Ekelund. Overall they believe it to be a merry, motley mix. Reality is fictional. Fiction is life. Life is art. Enjoy you delightful motherfucker!

Dear you go mon ami, ten songs. Personally I’m deeply fond of this collection. Perhaps most so of ”The truth shall set you free”, an inspirational prog-pop song. I hope you also find your sweet sonic spot on these neo-retro-modernistic meadows. So, let’s wrap this up. Atcn is a strange creature, one half european, one half american, and one half sino. You can find the band here, on Soundcloud and on Spotify. Well, I guess you can find them on a bunch of other places as well. But their presence is most strongly felt there.