Dear Masons, fans and readers. Today we ask the stunning question: What do religious people know that we don’t? In other words, what does “the religious experience” consist of in reality?

Oh, dearest subjects…! The transcendental religious experience is like nothing you have ever felt. One can literally feel the Holy Spirit coming inside one’s body and bringing one closer to the glorious Lord. I officiated a grand funeral recently, and there I had the opportunity to see who were the True Christian Believers, and who was just going through the motions. When an individual is caught up in the rapture of religious extasy, the light of God can be seen in their eyes. Their conviction becomes so intense that they would never turn from the Lord, even if he told them to do so. Also, please note that if you see a devotee of another congregation experiencing transcendence, they are surely faking it. It is only the members of my congregation – The Most Holy Pesticiderous Church of North-Northeast Doomtown – that are eligible to recieve this Godly service. Please report all apostates to my Holy Office.

I can see no evidence that the adherents of any one faith are more easily able to achieve this feeling that any other. Christians, Buddhists, Scientologists, Muslims… They all seem to be able to access this “mystical” phenomenon of connectedness with the world and with their alleged supernatural caretakers. I would even humbly submit, however impossible it is to know what another is feeling, that us earthbound atheists are also just as able to feel transcendence. Contemplation of our scientifically valid connections to this vast universe, for instance, can evoke similar feelings. So what to make of it? My theory is that transcendence – just like intuition, prophecy and true love – is just another part of our pattern recognition. Now, pattern recognition is one of the defining features of humanity. It is most useful, but it evolved because it has been beneficial in getting us to survive, not because it bears witness of something beyond ourselves. So it is not always a good idea to take these notions seriously. For our part, atheists have the whole of science to back up our transcendental feelings; we were indeed formed of particles from long-gone stars, the connection does exist. The religious have nothing but old and outdated tales written at a time when these feelings could not be explained any other way. And since these tales are so outdated (past their sell-by date, one might even say), they can easily be used to convince people to do pretty much whatever their ideological leaders desire. 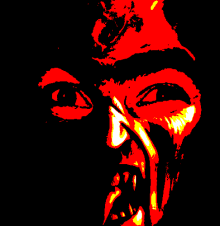 Bow to the Glory of Satan, putrid mortals! The mystical transcendental experience is not for the likes of you! Only Dark Lord Satan has blessed us with the powers of prophecy, the power of flight, and the ability to curse one’s enemies with bad luck and extreme misfortune! Why, only last week, I cursed a disgusting lowly housewife who had the gall to question my right to wear my “LOVE THE DEVIL – EAT CHILDREN – FUCK THE SYSTEM” t-shirt at the mall! And just as I had uttered the curse, mall cops arrived to deliver me from this wretched beast and back to the safety of the parking lot! This is ultimate proof that Satan has my back!