“In addition to winning the Electoral College in a landslide, I won the popular vote if you deduct the millions of people who voted illegally.” 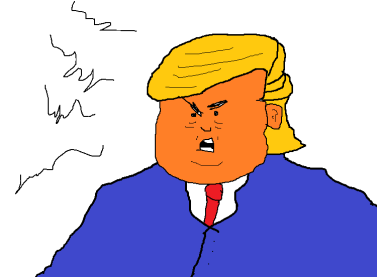 Although this image was created by a man with no artistic skills whatsoever, 100% of our focus group stated that they couldn’t tell whether it is a drawing or a photo.

This is completely unacceptable and deeply shameful for all Americans. Particularly those who saw fit to actually vote for him. Because, you can’t say weren’t any signs, or to put it another way, a few DEALBRAKERS.

You’ve elected a president who 1) cannot or will not fact-check basic information  and 2) does not understand the immense consequences of this actually being true. If this was true it would, by far, be the biggest fraud in history of the American nation.

Both of these makes the Truthranger unqualified. Of course. As everyone knows.

The broader picture is even more disturbing though. Because no one really reacts to this, it implies that no one really takes this man seriously. No one takes the President-elect of the United States of America. That is breathtaking.

It also implies that the people cheering him on don’t really give a shit about his skillset either. It was more important to have a white-power supporting man there than a nuanced technocrat.

And when the dust settles, it’s pretty obvious disinformation has held a significant role. Made-up news from classic players like Fox News took a back seat to made-up news from new foreign players like Russia (of course) and, my personal favorite, Macedonian college kids.

If your future President can’t distinguish between a fact and a blatantly made-up lie, what hope is it for the people?